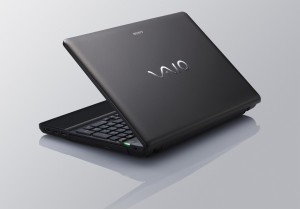 The Sony Vaio E is a new series, yet another line in what’s become a massive and somewhat confusing collection of Sony laptops. The chief selling points for the Vaio E are its affordable pricing, multimedia features, and Intel Core i3 and i5 processors, along with an aggressive color scheme. We’ve reviewed and generally liked many of Sony’s multimedia Vaios, especially recent ones, so we were eager to see what the E could add to the equation.

The Vaio E will be available in a variety of customizable configurations, but Sony is currently offering a set model for preorder that has a Core i3 processor, a 500GB hard drive, 4GB of RAM, and a DVD/CD burner. That preconfigured model, which is what we tested, is called the EB1JFX/B.

The E is large, clean, and boxy, offering up a big rectangular profile and an overall feel that’s solid in the base but slightly flexy in the lid. The Vaio E is a budget machine, slotted below the Core i7 Vaio F, intended for people who want a large-screen laptop with enough speed to do most tasks well, but without spending top dollar. Based on its mix of features, power, and value, we’re inclined to recommend it–although we’re keenly aware of how boxy a laptop it is. At $799, it’s a solid package while not being particularly inspiring. You probably won’t regret buying one, but it’s not a machine you’re likely to boast about, either.